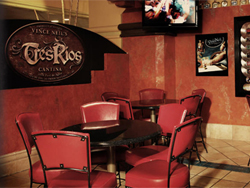 Former Mötley Crüe front man, Vince Neil, put his stamp on Tatuado with not only the sounds of Mötley Crüe, but Neil's signature tequila.

Tequila has a reputation for making people do funny things, whether it's dancing on the bar in front of a crowded room of strangers or praying to the porcelain gods at 3 a.m. We've all been there.

At Vince Neil's Tatuado Cantina, the sounds of Mötley Crüe's hits, so familiar to any child of the '80s or even a Guitar Hero fan, spew into the hallway at the Westgate Las Vegas Resort & Casino. Neil is known as the legendary front man of Mötley Crüe and is a Las Vegas native, but fans have been enjoying his signature tequila for years and will find it prominently featured in the drink menu, along with plenty of Mötley Crüe-themed items throughout.

Drinks include the "Feelgood" rita, named after Mötley Crüe's smash hit "Dr. Feelgood." Outside of the cantina, you'll find two statues of women who appear to be carrying vases of what we believe would be tequila, this is a tequila bar after all. Both statues are personally signed by Neil himself and, if you'd like, could be personally signed by you. While most patrons pass on well wishes for the cantina, you are pretty much free to put anything on there including "Go Yankees," as one patron wrote.

For your Vegas Vacation